The world’s most polite searcher 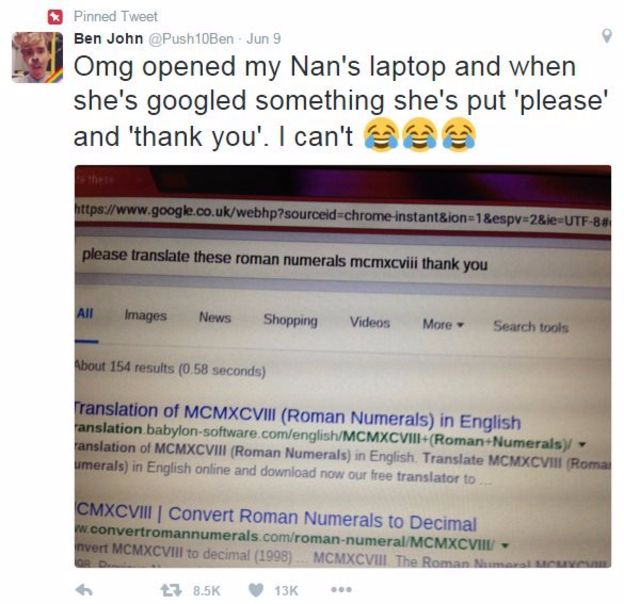 Using Google to search for things on the internet has become a common part of most people's daily lives.

But it seems the internet giant may just have found its politest searcher - 86-year-old May Ashworth.

Ben's nan likes to watch TV and it seems she has an interest in knowing when programmes were made.

Television shows still use Roman numerals on their credits to show the year of the programme.

"She saw a TV show the other day but couldn't work out from the credits when it was made, so she put the numerals into Google," said Ben.

"It made me chuckle so I thought I'd take a photo and put it on Twitter for my friends to see. I didn't expect so many other people to see it!"

But hundreds of thousands of people have seen the tweet - and many have expressed how much they loved it.

Ben said his nan doesn't use her laptop much. "She goes to a silver surfers' club at the local library to learn about computers and the internet, but she hardly ever uses her laptop."

"I asked my nan why she used 'please' and 'thank you' and it seemed she thinks that there is someone - a physical person - at Google's headquarters who looks after the searches.

"She thought that by being polite and using her manners, the search would be quicker."

As well as social media users, Google UK was also charmed with Ben's nan May. The company noticed the photo of the search and tweeted Ben's account with a message for her saying: "In a world of billions of searches, yours made us smile."

Ben said he's surprised at the amount of attention his tweet has received. "I posted the photo on Thursday, and it wasn't immediately picked up by the media. I've even had calls from the US for me to speak on their shows."