This page contains a miscellaneous collection of recent IT-related News items that may (or may not!) be of interest.  Click on the headings for the full articles.  The items are listed with the most recent item first.

Microsoft is killing off Windows Live Mail – what should I do? 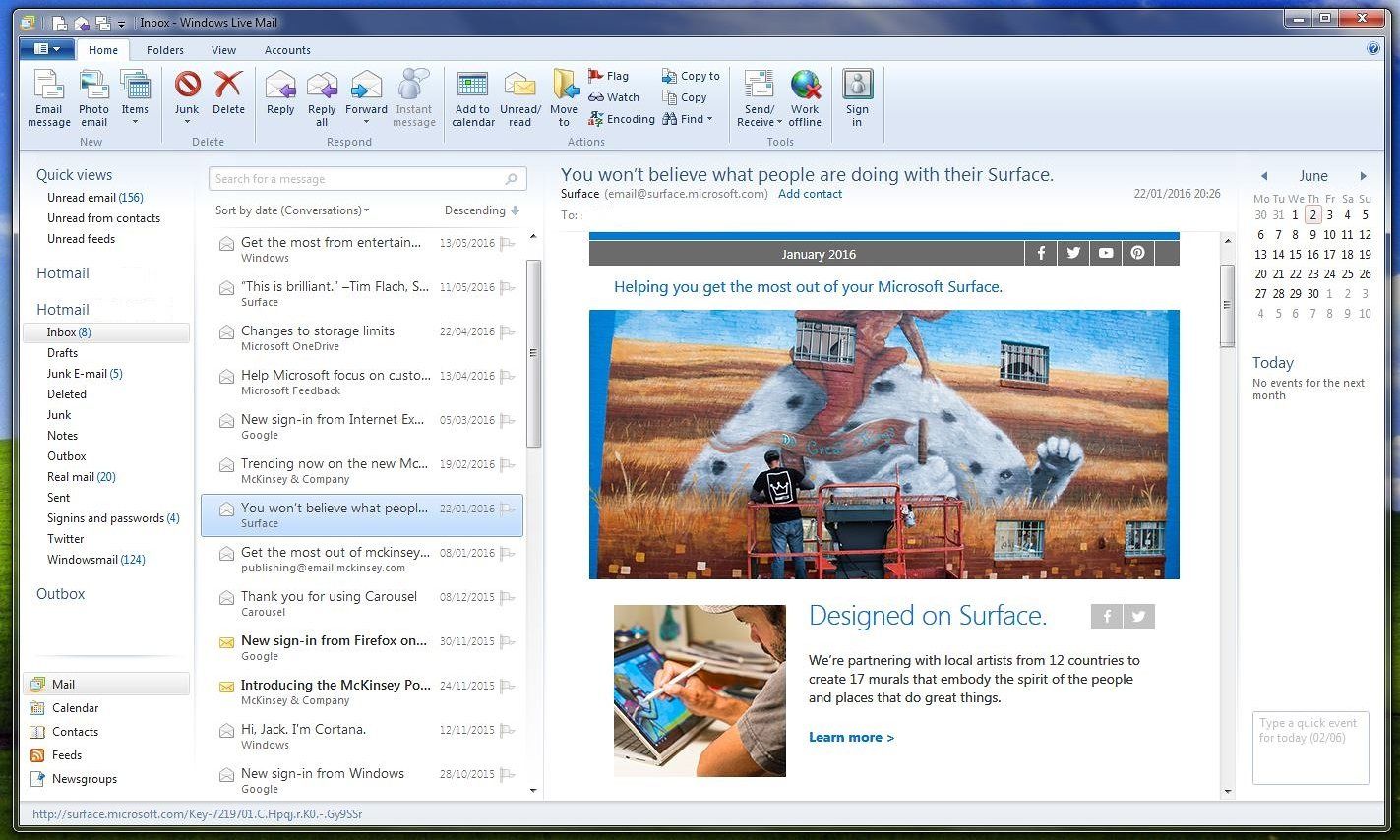 A screenshot of Windows Live Mail, which Microsoft is switching off

I have used Windows Live mail since its introduction: it’s simple, clear and uncluttered. Now Microsoft is going to end it. Help! With its automatic sign-in, I haven’t used my passwords in years. How can I transfer my accounts? Tony

Windows Live Mail is a desktop email program Microsoft introduced to replace Outlook Express. It is part of the Windows Essentials suite, which includes several fine programs: Live Mail, Live Writer, Photo Gallery, MovieMaker and OneDrive. (It used to include Messenger, which was replaced by Skype.) Unfortunately, the suite has not been updated since 2012, because Microsoft switched to developing securely sandboxed, touch-oriented apps instead.

Facebook users are receiving an email from the social network asking them to download another of the company's apps if they wish to continue using a service that syncs their photos.

You'll need to spend a few Moments downloading another Facebook app if you want to keep all your photos inside the social network's world.

Facebook users with a synced photo album are receiving an email from the social network that says they'll have to install and log in to the company's Moments app by July 7, or else have all their photos inside that album deleted.

The app, released last year, allows for private uploads of photos for sharing with friends without actually putting them onto the social network. Before Moments, Facebook put into its main app a similar feature called Photo Sync, back in 2012, which, when turned on, automatically uploaded photos from a smartphone into a private "Synced from phone" album. That album will be going away after July 7, making Moments the way Facebook wants its users to automatically upload photos privately.

Rather not deal with Moments? There's another option for rescuing your synched photos, says Facebook.

If you "don't want to download Moments, [you] will also be able to download a zip file of your synced photos from your Facebook profile on your computer before July 7th," the company said in an emailed statement.

Technically Incorrect: Score Assured takes a "deep dive" into all your social-media activity, analyzes the words you use and recommends whether you'll be a good tenant or employee.

Score Assured takes control of all your social media, scrapes it for keywords such as "loan," "pregnant" and, who knows, "libertarian," analyzes them and then offers a picture of the supposed real you to your potential landlord or employer.

Google's 'Project Abacus' wants to replace passwords and pins with biometric logins -- and banks will do the initial testing soon.

Google's 'Project Abacus' wants to replace passwords and pins with biometric logins -- and banks will do the initial testing soon.

Google believes it can eliminate the tedium of having to enter a password for your smartphone, and banks will be the first to trial this experimental login method, with plans for a more general scheme to be rolled out to others by the end of the year.

What Google is doing … is working on a system which replaces using a password or PIN to unlock the phone with one which
uses biometric data and other information.

Here's a security hole problem: Keeping around applications that have reached the ends of their lives, are no longer maintained by their original developers, and do not receive security updates.

Applications that have reached the ends of their lives, are no longer maintained by their original developers, and do not receive security updates are a problem. However, many users forget to remove these applications from their machines or do not realize that they pose a danger.

"If a program is end-of-life, uninstall it," says Kasper Lindgaard, director of research and security at Secunia Research, which has compiled a list of the riskiest applications. "If you are no longer using a program, uninstall it so that you do not end up forgetting about it. If you leave it sitting in the background it may become outdated and unsecure."

In 2013, the number of end-of-life applications on user machines was between 3 and 4 percent, but it's hovered between 5 and 6 percent for the past 12 months.

According to a report Secunia released at the end of October, the following are the 10 riskiest applications, based on market share.

Many users do not know that this application even exists. In other cases, removing it might cause other software to stop working.

Current market share: 35%
Originally released in in 2011, support  ended in April 2015, though the extended support release is not yet end-of-life.

Java is commonly loaded by Web browsers, making it a popular avenue for attacks. And, like Microsoft XML Core Services, it was typically unpatched. Before support ended, Java JRE 1.7 and 7 were on 44 percent of user machines, with 80 percent of installations unpatched.

Current market share: 35%
Originally released in July of 2015, it was superseded by Google Chrome 45 in September.

The previous two versions of Chrome and Firefox browsers have made the top 10 list of Secunia's end-of-life reports for the past two years, as users take their time upgrading to the newest releases.

According to Clicky Web Analytics, which calculates browser market share based on traffic to over 500,000 websites, Chrome 43 had a slightly longer transition period than typical, possibly because of the summer season when users were more likely to be away from a computer and not do the update immediately. Originally released in May of 2015, it was superseded by Google Chrome 45 in July.

Current market share: 24%
Originally released this July, it was superseded by Firefox 40 in August.

According to a survey conducted by Mozilla a couple of years ago, most users fail to update their browsers either because they're happy with their existing setup and don't see any pressing need, or they don't have the time to do an upgrade and have postponed it until they're less busy.

Current market share: 24%
Like Chrome 43, Firefox 40 was replaced in mid-summer, leading to a slightly longer than usual transition period. Originally released this August, it was superseded by Firefox 41 in September.

Adobe AIR allows developers to package the same application for multiple platforms -- Windows, Macintosh, iOS, and Android. At least a couple of versions of Adobe AIR have been in every Secunia end-of-life top-10 list for the past two years.

Current market share: 16%
Before support ended in the second quarter of 2013, Secunia reported that Java JRE 1.6 and 6 were present on 53 percent of all machines -- with a 75 percent unpatched rate. The following quarter, the software was end-of-life, but was still present on 39 percent of machines. It's been hanging around the longest of all the major end-of-life applications, as some users aren't aware they still have it, or retain older versions to maintain compatibility with applications. Originally released in 2006, support ended in February of 2013, though the extended support release is not yet end-of-life.

Current market share: 13%
Adobe AIR 3.x was on the top 10 most vulnerable applications list in the fourth quarter of 2013, before support ended. It was present on 43 percent of machines, with a 52 percent unpatched rate. But that unpatched rate automatically becomes meaningless when an application goes end-of-life since hackers continue to find new vulnerabilities. Even installations that had been fully patched before will become vulnerable once support ends and the vendor no longer releases patches. Originally released in 2011, the successor AIR 4 was released in January 2014.

Do you use PayPal? Beware of scam emails!

An ever-growing number of retailers now encourage customers to pay via PayPal, but if you’re doing it on a credit card – for items that cost £100+ – you’re missing out on valuable extra protection. That’s because using PayPal scuppers your Section 75 rights.

I’m hearing more reports of people falling foul of this, such as Sharon Fisher, who tweeted me: "Is it true Section 75 on credit cards doesn't cover you for PayPal/Amazon 3rd party purchases? Tried to claim." So I want to use this short guide to run you through how it works.

Before I explain the issue with PayPal, it's first worth understanding the rights it scuppers.

Section 75 of the Consumer Credit Act 1974 says if you pay for something costing between £100 and £30,000, specifically on a credit card, the card company is jointly liable with the retailer.